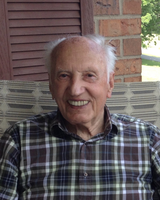 Ferdinand Erker, age 92, of Hawley died Monday, January 6, 2020. He is survived by his wife of 64 years, Therese (Vogrin) Erker. Born July 10, 1927 in Yugoslavia, he was the son of the late Georg and Antonia (Lobisser) Erker. He was the owner of Erker's Jewelry in Glendale, Queens, New York, where he worked side-by-side with his wife for over 40 years. Having maintained a second home in Hawley since 1969, he and his wife became permanent residents in 1995. Ferdinand had a wonderful sense of humor, enjoyed the company of his family and friends, and dedicated his life to his family, even up to his last day. In addition to his wife, he is survived by his son: Ferdinand J. Erker, and son-in-law, Cory Gnazzo of Brooklyn, NY; and his sister, Helga Jaklitsch, and her husband, Joseph of Villach, Austria. He was preceded in death by his brothers, George and Arnold and his sisters, Leopoldine and Maria. Calling hours will be Friday, January 10th from 9 to 9:30 AM at Teeters' Funeral Chapel, 505 Church St, Hawley, PA, followed by a Mass of Christian Burial at 10 AM at BVM Queen Of Peace Roman Catholic Church, 314 Chestnut Ave, Hawley by Rev. Richard W. Beck, Pastor. Burial will be in B.V.M. Queen Of Peace Cemetery, Hawley in Spring. In lieu of flowers, memorials may be made to American Heart Association NEPA District, 968 Postal Rd, Suite 110, Allentown, PA 18109, www.heart.org.