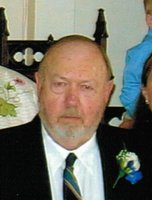 Richard Joseph Getz, a resident of Hawley, passed away on Saturday, December 26, 2020 at the age of 89, after a short illness. Born December 17, 1931 in St. Louis, Missouri; he served in the Navy during the Korean Conflict. He married his high school sweetheart, Betty Ann Gaertner. They were married for more than 50 years before she passed away 16 years ago. In 2010 Richard married JoAnn Neimeyer. She passed away in 2019. He was an avid stamp collector and his hobby spanned more than 60 years. He was also very involved in genealogy and amassed an extensive collection of information. He is survived by a son, Daniel Getz; a daughter, Janet Manning; a son-in-law, Michael Manning; a grandson, Joshua Manning; a granddaughter, Stacy (Manning) Cariello;a granddaughter-in-law, Jennifer Manning; grandson-in-law, Scott Cariello and five great grandchildren: Jared and Jocelyn Manning and Leigh, Juliana and Natalie Cariello. He was a good man and was greatly loved. He will be missed but he is at peace and reunited with the love of his life. For that we are all thankful. Private burial will be in Elma Cemetery in Elma, NY.