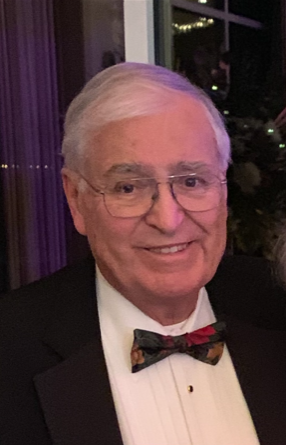 Please share a memory of Daniel to include in a keepsake book for family and friends.
View Tribute Book
Daniel L. McGinnis, 82, of Round Hill, Virginia passed away of congestive heart failure on July 5, 2021 surrounded by his family. He was a devoted parishioner of St. Bridget of Ireland Catholic Church in Berryville, Virginia. He is survived by Arlene, his wife of nearly 60 years; their three daughters: Colleen McGinnis, KellyAnn Royston and Erin Meitzler and their spouses; 5 grandchildren; 1 great grandchild; his sister: Maureen Kane; and his brother: Edward McGinnis. Born and raised in Honesdale, Pennsylvania, Dan graduated with a Bachelor of Arts degree from the University of Notre Dame, and a year later, earned a Bachelor of Science degree in Aeronautical Engineering, also from the University of Notre Dame. While working to support his family, he earned a Masters degree in Business Administration from Lehigh University. He started his career as an engineer at Hercules Corporation, working in both Cumberland, Maryland and Kenvil, New Jersey on the Polaris Missile project. He then held numerous positions at Air Products and Chemicals, based in Allentown, Pennsylvania. Furthering his career, Dan moved on to Division Controller for the international consumer products division of Bausch & Lomb based in Rochester, New York. After three years in that role, he joined C & J Clark America, Inc. as Vice President and Controller in West Chester, PA. In the midst of the worldwide communication technology revolution of the early to mid-1990s, Dan took on the role of president and later CEO of Coherent Communications Systems Corporation based in Hauppauge, NY. He successfully moved the business operations to Ashburn, VA. Following an initial retirement from Coherent, Dan was drawn to a leadership position as President and CEO of SOTAS, Inc., in Gaithersburg, MD. In addition to his primary employment, Dan served on numerous boards, including Loudoun County Economic Development, Loudoun Hospital and Independence Air. He also started a family foundation supporting education, healthcare, aid and relief, and Catholic organizations. Serious by nature, his brilliant wit was unexpected, as was his ability to slay a room. Although a man of few words, his interest in everything mixed with his zeal for reading, awarded Dan a breadth of knowledge that made conversing with him fascinating. Dan obtained both a pilot’s and a captain’s license, and was an avid mariner. He loved nothing more than having his family near and sharing his interests in boating and traveling. He and Arlene planned multiple unforgettable global trips with their children and grandchildren. Those closest to him knew him to be determined, demanding, and decisive. Throughout his life, Dan was a role model for many, leading by his faith, his integrity, and his generosity. There is no measure of the number of lives he positively impacted during his lifetime. His memory will be eternally cherished. Visitation will be held on Sunday, July 18th, from 7:00 - 9:00 pm at Teeters' Funeral Chapel, 505 Church St., Hawley, PA. A Funeral Mass will be held at 10:00 AM on Monday, July 19th, at Blessed Virgin Mary Queen of Peace Church, 314 Chestnut Ave., Hawley, PA. In lieu of flowers, the family respectfully suggests donations be directed to Capital Caring Health at http://www.capitalcaring.orgin the name of Daniel L. McGinnis.
Sunday
18
July

Share Your Memory of
Daniel
Upload Your Memory View All Memories
Be the first to upload a memory!
Share A Memory
Plant a Tree