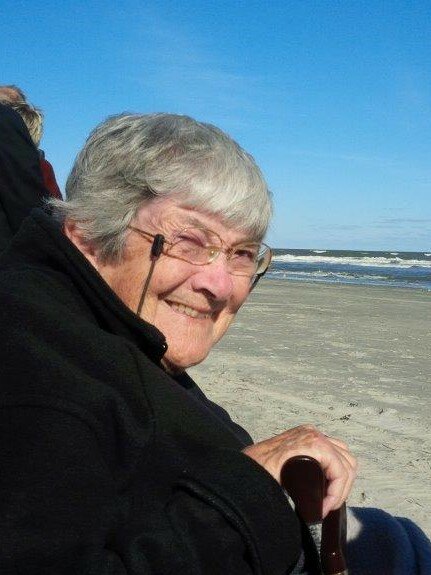 Please share a memory of Joan to include in a keepsake book for family and friends.
View Tribute Book
Joan Heslin Moore died on November 6, 2021 in Timonium, MD, at the age of 100. She was born Joan Margaret Leinen on August 11, 1921, in Rochester, NY, and was the second eldest daughter of Raymond Francis Leinen and Frances Connor Leinen. She was predeceased by siblings Mary Elizabeth Smith, Frances L. Costello, and John Geoffrey "Jack" Leinen. Joan was widowed twice. Her first husband, Dr. Thomas Madden Heslin, predeceased her in 1970. She is survived by their children: Barbara Mueller (Bruce) of Union Hall, VA; Christine Heslin of Penhook, VA; Steven Heslin (Diane) of Youngsville, NC; W. Kevin Heslin (Jacqueline) of Baltimore, MD; Patricia Greenwood (Robert) of Viera, FL; Timothy Heslin (Kellymarie) of Naples, FL; Kathleen Catzen (P. Blazer) of Baltimore, MD; Thomas Heslin (Tricia) of Clinton Corners, NY; and Peter Heslin (Janette Cortright) of Hawley, PA. In 1972, Joan remarried James Moore of Poughkeepsie, NY, who predeceased her in 1992, and became stepmother to Martha Moore-Russell, deceased (James) of Ossining, NY; James F. Moore Jr., deceased (Susan) of Poughkeepsie, NY; Korleen Cooley (Myles) of Palm Beach Gardens, FL; Stephen Moore of Pleasant Valley, NY; and Kathryn Weissmann (Thomas) of Wallkill, NY. For those of you counting, that's 14 kids. Thanks to them, Joan is also leaving behind 31 grandchildren and over 20 great-grandchildren. She is also survived by many nieces and nephews and their offspring, daughter-in-law Linda Nasser Heslin, and sister-in-law Jeanne Leinen. Joan graduated from Our Lady of Mercy High School in Rochester, NY, in 1938 and from the College of New Rochelle in 1942. Shortly after her college graduation, Joan enlisted in the Navy's fledgling corps of Women Accepted for Volunteer Emergency Service. She was commissioned as a communications officer in the WAVES in January 1943, and she served as a "Code Girl" for the duration of WWII, first in the offices of the Eastern Sea Frontier in Boston and then at the 12th Naval District in San Francisco. Joan retired from active service in 1946 with the rank of Lieutenant to marry her first husband, Tom, days before he shipped off to Japan as a doctor with the U.S. Army. She followed a few months later, and they spent the early years of their marriage overseas. After returning to the States, Joan and Tom were longtime residents of Bound Brook, NJ. A devoted member of the Roman Catholic Church and an indefatigable fundraiser and volunteer, Joan dedicated her life to raising her children and helping others. Whether it was a home game or away, her kids knew that she would be cheering on the sidelines with a jug of hot chocolate, and in summers they looked forward to Tuesday Trips, when Joan let them stick a pin in the NJ map and turned their random choice into an adventure. After remarrying, Joan moved to Poughkeepsie, where she became a fixture at St. Francis Hospital, first driving cancer patients to their appointments and later staffing the main information desk. Joan's door was always open, and there was always room for one more at her dinner table. Joan spent the last decade living happily in her own apartment at Mercy Ridge Senior Living Community in Timonium. But she never stopped returning to her beloved farmhouse near Lake Wallenpaupack in the Poconos, where she hosted an annual family gathering for more than 50 years. In 2004, Joan was present for the opening dedication of the WWII Memorial on the National Mall. Accompanying family members delighted at seeing veterans of all vintages salute her; she delighted at chatting with archivists from the Library of Congress. Their conversation became part of the Veterans History Project and can be found at www.tinyurl.com/LtJHMWave. Joan said she joined the Navy because she "wanted to be where the action was," and for most of her life, she managed just that—because wherever Joan was, that's where people wanted to be. She was known to dance (and talk) into the wee hours of the morning. She rescued dogs, kittens, bunnies, mice, birds, and people. She was an avid storyteller, gardener, reader, golfer, and traveler. On weekends you could find her in a comfy chair cheering for "her" Giants, a copy of Barron's and a finished crossword puzzle nearby and a scotch in her hand. Few things riled her more than an un-righted wrong, and if she had an opinion, you would know it. Even greater than Joan's capacity for opinions, though, was her capacity to love. And so she leaves behind not just a large family, but a large hole in many hearts. A private burial and graveside service for the family will be held at B.V.M. Queen of Peace Cemetery in Hawley, PA. A celebration of life for family and friends will be held August 27th at 1:30 PM at the big house. If planning on attending, please notify a family member. The 4:30 Saturday Mass, on August 27th held at St. Veronica's Catholic Church on Route 507, will be said in Joan's memory. In lieu of flowers, please give to your favorite charity.

Share Your Memory of
Joan
Upload Your Memory View All Memories
Be the first to upload a memory!
Share A Memory
Plant a Tree