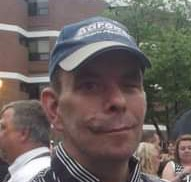 Please share a memory of Charles to include in a keepsake book for family and friends.
View Tribute Book
Charles Richard Houman, age 56, of Hawley died Wednesday, February 9, 2022 at Hospice of the Sacred Heart, Dunmore. He is survived by his wife of 30 years, Gail Lynn Cron Houman. Born July 3, 1965, in Honesdale, he was the son of Donald Richard Houman of Wilkes-Barre and the late Carol Joyce (Teeple) Houman. Charlie worked as a chef at many local restaurants over the years, including the Hawley Diner, Settlers Inn and Ehrhardt’s Restaurant. Charlie was a hard worker and a generous man who was always willing to lend a hand to anyone who needed it. In addition to his wife and father, he is survived by his daughter: Marina Houman of Hawley, and several brothers and sisters. He was predeceased by a son, C.J. Houman Private cremation was held at Lake Region Crematory, Lake Ariel. A Celebration of Charlie’s Life will be held from 12 to 4 PM on Saturday, February 19, at Hamlin Assembly of God, 613 Easton Turnpike, Lake Ariel, PA 18436.
Saturday
19
February