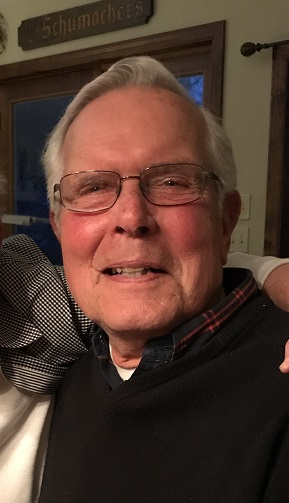 Please share a memory of Henry to include in a keepsake book for family and friends.
View Tribute Book
Henry Wilhelm Schumacher, age 91, of Lakeville passed away peacefully at home surrounded by his loving family on Wednesday, February 16, 2022. He is survived by his wife, Doris E. (Drewes) Schumacher, with whom he would have celebrated their 65th wedding anniversary on March 2nd. Born April 21,1930 in Richmond Hill, New York, Henry was the son of the late August Sr. and Annie Schumacher. While raising his family on Long Island, he rose through the ranks with New York Telephone Co. and retired as an executive after 38 years; after which he worked for the Federal Aviation Administration for 10 years. Henry served as President of the congregation of Trinity Lutheran Church in New Hyde Park, NY. Upon retiring to Stanfordville, NY with his wife, he was the head elder at All Saints Lutheran Church in Lagrangeville, NY. A gifted gardener at home, he volunteered his time in the rose garden at the Vanderbilt Mansion in Dutchess County, NY. He shared his passion of gardening with his children as well. He was also a seasoned hunter and enjoyed spending his time outdoors. A Lakeville resident for the past ten years, he was a member of St. John's Evangelical Lutheran Church in Honesdale. Henry was an avid reader with an impressive memory who believed in and practiced life-long learning. However, more than anything else, Henry was a selfless man of faith and family. In addition to his wife, Henry is survived by his children: Susan Lesniak and her husband Robert of Lakeville, Eric Schumacher and his wife Jennifer of Taylorsville, NC, Carol Cinnamo and her husband Vincent of West Hempstead, NY, and Ruth Casella and her husband Joseph of Hawley; one brother: August Schumacher Jr. of Stanfordville, NY; eight grandchildren: Justin Worzel and his wife Vanessa, Zachary Worzel and his wife Danielle, Morgan and Madison Cinnamo, Taylor Casella and her husband Andrew Christman, Emma Casella, Robert Lesniak III, and Allison Veloso and her husband Eric; 5 great grandchildren: Vivian, Jack Henry, Samuel, Finn and Liam; and one more great grandchild expected to arrive in June. He was preceded in death by a brother, Rudolf Schumacher of Florida and a son-in-law, Glenn Worzel of Hawley. A Memorial Service for Henry will be held Saturday, April 9th at 11 AM at St. John the Evangelist Lutheran Church, 107 Seventh St Honesdale, PA 18431. Private cremation was held at Lake Region Crematory. Interment of his urn will be held at St. John’s Evangelical Lutheran Cemetery, Honesdale. In lieu of flowers, memorial contributions can be made in support of Compassionate Care Hospice, c/o Amedisys Foundation, 1444 East Lackawanna Avenue Suite 218 , Olyphant , PA 18447; or the Stain Glass Fund at St. John's Evangelical Lutheran Church, 107 7th St., Honesdale, PA 18431.
Saturday
9
April

Share Your Memory of
Henry
Upload Your Memory View All Memories
Be the first to upload a memory!
Share A Memory
Plant a Tree